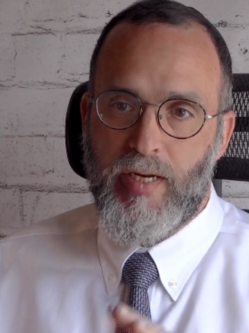 Yaakov Shapiro is a scholar of Judaism, an international speaker, author, and a pulpit rabbi for over 30 years, now emeritus. He has attained an enviable place in the arena of anti-Zionist public intellectuals, having constructed a unique oeuvre on the ideology of Zionism and its hostile relationship toward Judaism.

After graduating high school at age 16, Rabbi Shapiro dedicated himself to full-time study of Jewish law and philosophy, becoming the protégé of some of the most well-regarded rabbinic scholars in Jewish Orthodoxy.

At age 19 he published his first book, a collection of original expositions on rabbinic principles of tort adjudication. His other books include a commentary on Judaic laws governing land disputes (2000), a commentary on first-cause philosophy (2009), and a compendium of original exegesis on the Bible (2017).

His most recent work, The Empty Wagon: Zionism’s Journey from Identity Crisis to Identity Theft (2018), a 1381-page treatise on the differences between Judaism and Zionism, is considered by many to be definitive. Rabbi Shapiro’s videos on Zionism have been seen by millions of viewers worldwide and translated into several foreign languages. His 7-minute video on President Trump’s recognition of Jerusalem as the capital of Israel has been viewed over 1.8 million times. He has lectured for live audiences numbering in the tens of thousands.

Rabbi Shapiro serves on the Board of Directors of International Council for Middle East Studies (ICMES.net), a Washington DC-based think tank working to advance understanding of states of mind in the Middle East. He has been cited in the New York Times, the Los Angeles Times, Haaretz, The Jewish Week, The Jewish Home, Studies in Religion/Sciences Religieuses (Canada), and other books and publications.